Fire Ecology in the ACFL 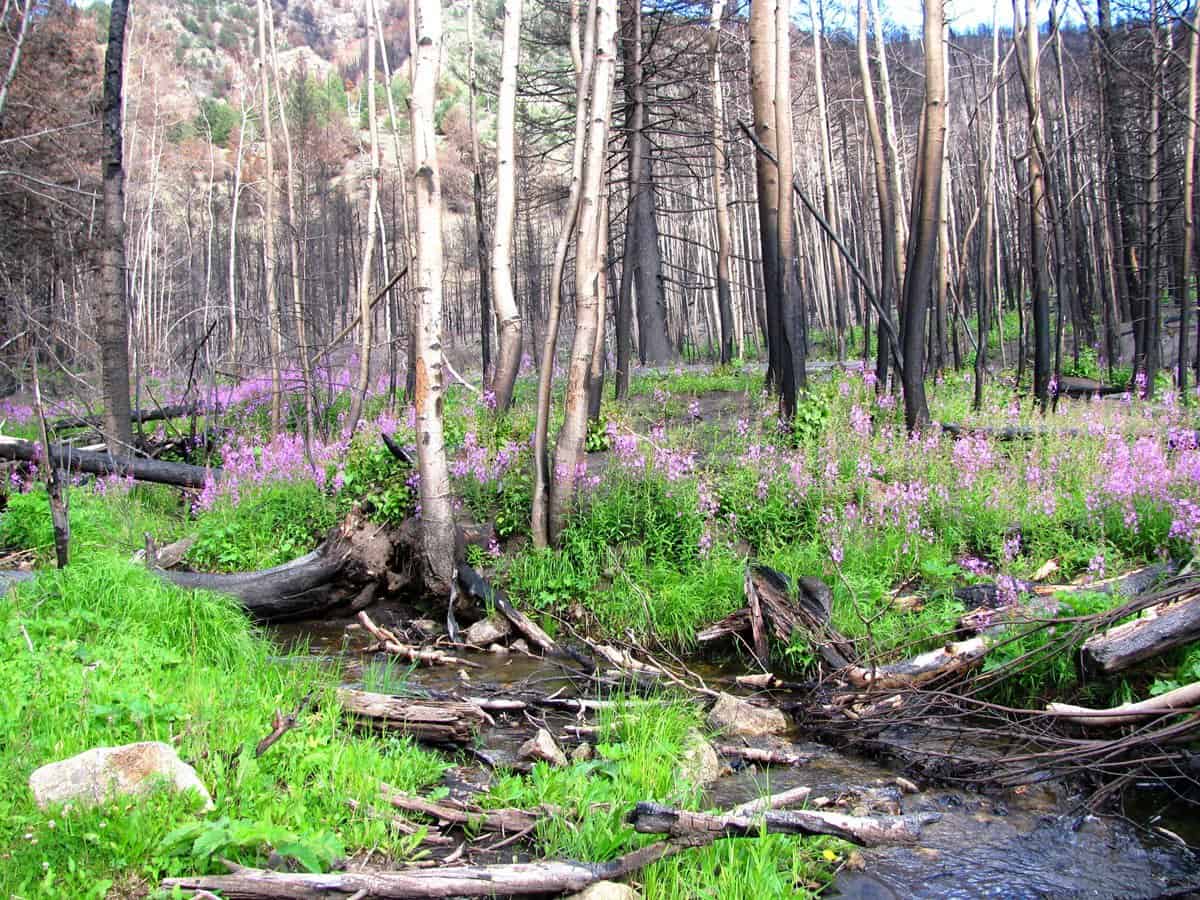 Hike into the Little Cranberry Lake area and you see for yourself: the defensive bark on Douglas Fir that kept them standing tall is now crusted in black char; Kinnikinick sprawls over rocks in the sun; Fireweed’s jewel-purple flowers stand in triumphant pyramids on each herbaceous stalk; crowds of young Pacific Madrone are ready to give life a go on this perfect rocky hillside. Life goes on in the forest.

Washington State hosts a remarkably wide range of habitats that can be grouped into distinct ecoregions—areas that “reflect ecological patterns occurring on the landscape.” 1 Many of these were defined by the Cordilleran ice sheet, which intensely carved the landscape as it retreated north 2.6 million years ago. The resultant ecoregions include vast stretches of rocky marine coast, temperate rainforest, grass, brush, and sage lands, extensive river systems, islands galore, epic mountain ranges, and giant volcanoes—what else could you ask for?! In addition to their variety, they sweep beyond our socio-political boundaries and connect to others in Idaho, Oregon, and Canada. Perhaps the most recognizable and prominent natural boundary in Washington State is the Cascade mountain range. Running longitudinally from south to north, the mountains act as a barrier against marine influences and create a rain-shadow effect, leaving the eastern side of the state very dry.

The dryness on the east side of the Cascades means that the ecoregions there historically (prior to climate change) experienced wildfires that would occur naturally, predictably, and beneficially in the environment. Native plants in these areas have many ways of coping with fire—and some even thrive because of it, as fire offers a disturbance that allows plants with certain adaptations to grow and flourish. Some plants have adaptations associated with germination, serotinous (late-opening) cones, rapid and adventitious growth, and/or fire-resistant foliage and bark. Seeds from plants like Kinnikinick can be consumed by fire, but of the seeds that do survive, the scarification process from the fire allows them to uptake water and germinate “in a nutrient-rich” and essentially “competition-free environment.”2 A mature Douglas Fir sports quite thick bark, well-known for protecting the rest of its body; the aptly-named Fireweed needs disturbance to grow. Fire can be a magical force of nature, creating rich and productive opportunities in an ecosystem.

On the west side of Washington, where the ecoregions are filled with moisture for most of the year, natural wildfire is more rare. The west slopes of the Cascades and into the Puget Trough ecoregion (where Fidalgo Island is), experience the majority of the glorious rainfall that Washington State has to offer. From October to March and April, and oh, why not— May (and sometimes in a year with a “June-uary”)— we are wet, wet, wet.  Yet, as our climate continues changing, soils and foliage will be at increasingly higher risk of drying out in the summer months, putting forests at a greater risk of igniting.

In 2016, an unattractive combination of humans, illegal fire use, and disregard for safety during the dry summer season led to more than a dozen acres in the Anacortes Community Forest Lands to burn. The accidental fire in the ACFL stayed near the ground and did not catch up into the forest canopy. The wind was blowing towards the lake that day, keeping the event isolated in the park. Fire crews from the City of Anacortes and Mt. Erie Fire Department responded rapidly. The Department of Natural Resources maneuvered helicopters rigged with massive buckets to retrieve lake water, and successfully slowed the flames. Many other crews attended to the forest in the following days as well, as the ground can smolder in heated pockets. The ACFL was lucky to have available crews and a dedicated response.

There aren’t silver linings for every crisis, but there is always something to learn— and we naturalists are watching with anticipation as the forest regenerates in the burn section of the ACFL. A community partner organization of Friends of the Forest, Transition Fidalgo, is leading the documentation process of this regrowth, as well as monitoring soil moisture levels.

Hike into the Little Cranberry Lake area and you see for yourself: the defensive bark on Douglas Fir that kept them standing tall is now crusted in black char; Kinnikinick sprawls over rocks in the sun; Fireweed’s jewel-purple flowers stand in triumphant pyramids on each herbaceous stalk; crowds of young Pacific Madrone are ready to give life a go on this perfect rocky hillside. Life goes on in the forest.

Still, we as humans will need to be mindful as climate change adjusts our ecoregions and the moisture content in our forests. So, this summer, please stay on the trails of the ACFL, follow the rules, and do not ignite any source of fire in any space of the forest lands, no matter how small.

When we are all looking out for each other and the earth, learning about the ecosystems around us and respecting the complexities of nature, we’ll be more than just fine— and the forest will too.

Reflecting and writing from Samish and Swinomish Lands.