Fidalgo Island: Not just a gateway to the San Juans, but a destination 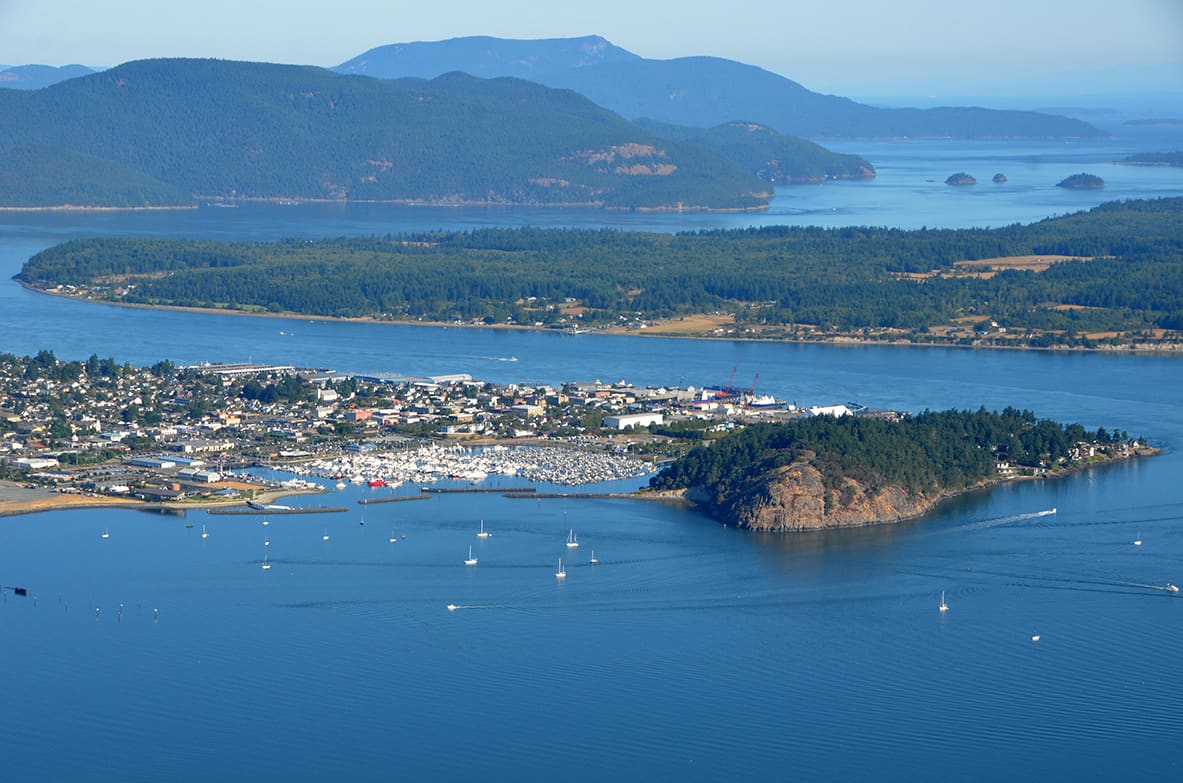 In prime months, the lush San Juan Islands attract thousands of tourists. Visitors pack the ferry terminal on Fidalgo Island, eager to hop to one of the other islands that dot the northwest Salish Sea. Ridership typically jumps about 50 percent in summer months, and rates follow; a car and driver will pay from around $50 to $70 for a round trip this summer.

In prime months, the lush San Juan Islands attract thousands of tourists. Visitors pack the ferry terminal on Fidalgo Island, eager to hop to one of the other islands that dot the northwest Salish Sea. Ridership typically jumps about 50 percent in summer months, and rates follow; a car and driver will pay from around $50 to $70 for a round trip this summer.

The jumbo green-and-white ferries stop at four of the biggest islands in the San Juan archipelago: Lopez, Shaw, Orcas, and San Juan. Each island has its special charms.

Shaw is intensely private, with few visitor services except for one small grocery, a campground, and a park. The cloistered nuns who live there have found a perfect retreat.

Outgoing Lopez is known as the “Friendly Isle.” Drivers smile and wave at friend or stranger. It’s the flattest of the islands, great for biking, with pastoral fields dotted with sheep, charming old farmhouses, locally sourced restaurants and the tucked-away bed-and-breakfasts that characterize these bucolic islands.

San Juan Island draws lovers of the Northwest’s iconic orcas, a.k.a. killer whales. The island has a large fleet of whale-watching boats, a well-curated whale museum, and a shore-based orca-viewing park. The island’s lively downtown, Friday Harbor, offers fine-art galleries, boutiques, restaurants and pubs with local brews, though several buildings were destroyed in a recent fire.

These serene islands offer endless beauty and respite. But in peak season — Memorial Day through Labor Day weekends — travelers can spend long hours queued up in their cars at the ferry terminal on Fidalgo Island. (Walk-ons pay less and stress less.) What many don’t realize is they are already in a Northwest paradise. It’s all around them, right there, on the island sometimes called the “First of the San Juans.”

Location: The San Juan Islands can be reached from the Anacortes Ferry Terminal at 5316 Ferry Terminal Rd. on Fidalgo Island. Check for updates at bit.ly/washington-ferries.

First stop on a Fidalgo Island tour is Anacortes. The port city of about 18,000 has retained its salty, working-waterfront character even as it has gussied up in recent decades. Look down the main drag, past the upscale restaurants and shops, and you may see a massive 200-foot fishing trawler towering high in a boatyard dock.

Boats are everywhere, and there are numerous vessel slips in local marinas. If you like walking along docks, you’ll find Alaskan gill-netters, luxury cruisers, racing sailboats, and classic wooden rowboats. Adventurers can rent kayaks, solo or duo, or sign up for guided nature tours. And you don’t need to go to the San Juans to go whale-watching: Boats depart regularly from Anacortes spring through summer.

One of Fidalgo’s crown jewels is 220-acre Washington Park, which looks out on the San Juan archipelago. Situated at Fidalgo’s west end, it shares much of the rest of the San Juans’ striking geology, flora, fauna, and wilderness vibe. Grabbing a west-facing park bench, visitors in the know can watch the crowded summer ferries thread their way out to the other islands and relax. They know that, without ferry or fuss, they’ve already arrived.

Location: Fidalgo Island is about 80 miles north of Seattle and connected by bridge to Skagit County and Whidbey Island.

Lyke is a writer based in the Pacific Northwest. Her website is marylynnlyke.com.