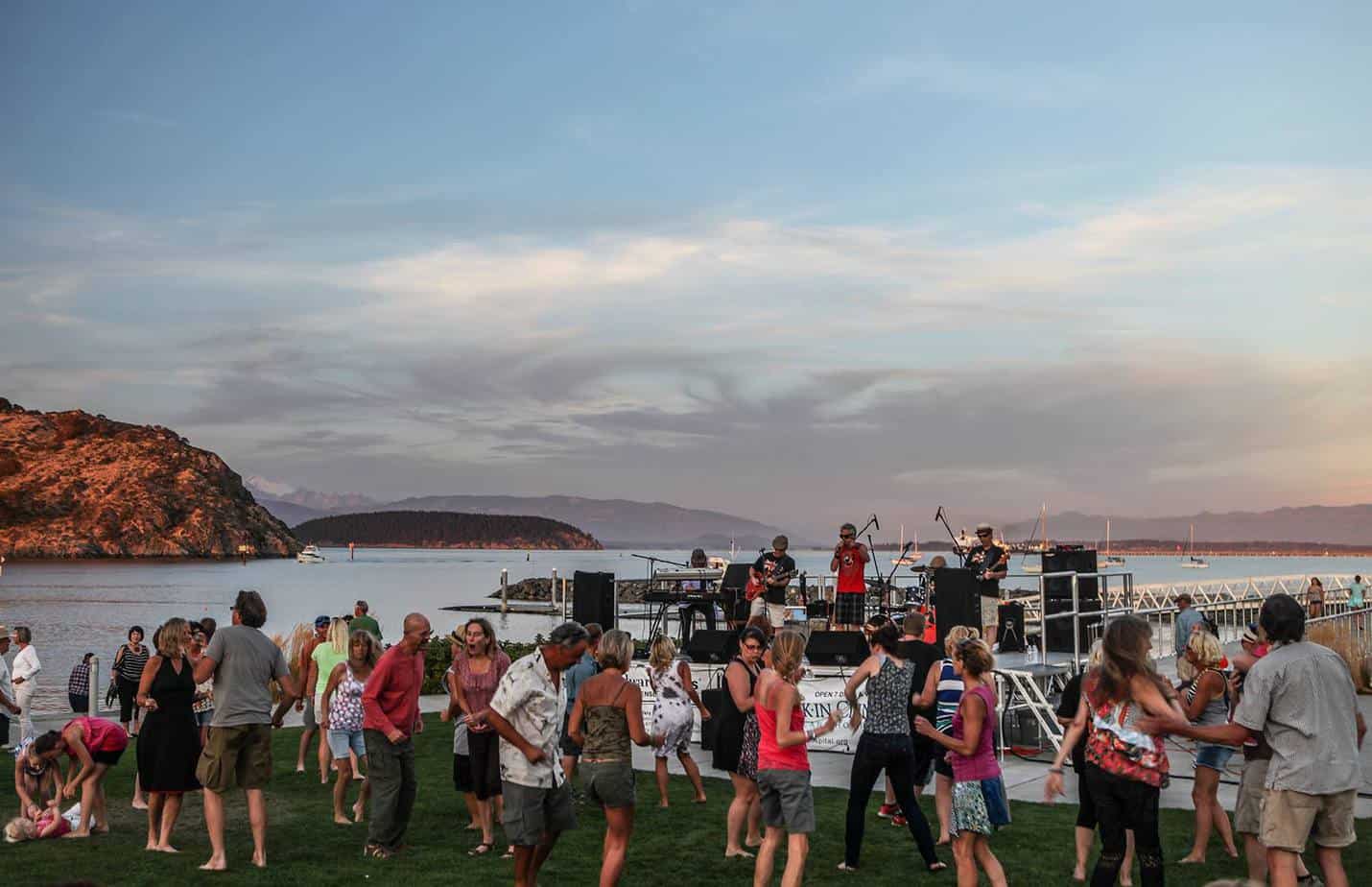 Whatever the mood‒jazz, rock, pop, classic, or country‒Anacortes’s passion for music lights up the beats on the streets.

Anacortes, whether in the summer, winter, spring, or fall, is alive with music. Why? Anacortians enjoy music. This passion has inspired many musicians over the years, including Gaelan Sylvia, Karl Blau, and the band The Lonely Forest. This enthusiasm could even be traced back to Anacortes’ early days when the town welcomed the fishing fleet with summer Plaza Dances. What does this mean for an island getaway to Anacortes? You can experience song and sound year-round. Some venues charge a cover charge, while others do not.

Let’s start with the Anacortes Public Library, which is all about the sound of silence. Acoustic Music is held on the third Tuesday and third Sunday of each month, and musicians perform on the baby grand piano or their own instrument. Local jazz ensembles perform for Jazz at the Library on the second Sunday of each month.

Every week, live music is scheduled at Rockfish Grill, which is known for its wood-fired pizzas and Anacortes Brewery beer. Tunes can be heard on Wednesdays and some Thursdays at 6 p.m. and Fridays at 8 p.m.

The Brown Lantern, which has been serving burgers and beers for more than 80 years, has music scheduled for 9:30 p.m. on some Fridays and the majority of Saturdays. On Thursdays at 8:30 p.m., musicians are encouraged to drop by for Open Mic Night to showcase their talents.

Do you want to listen to music outside? Anacortes has it covered, or should I say uncovered. From May to October, The Anacortes Farmers Market hosts live music in the courtyard on Saturdays from 10 a.m. to 1 p.m. Nearby, the Croatian Cultural Center serves Croatian cuisine, and the Vela Luka Orchestra performs on the outdoor patio during the Anacortes Arts Festival, and if their schedule allows, they entertain guests on summer weekends. There is also the Vela Luka Festival in March and the St. Nicholas Feast in December, both of which include Croatian food, music, and dance.

The Heart of Anacortes, located in historic downtown Anacortes, begins its summer lineup in June and schedules bands well into the warm days of September. To take advantage of the Pacific Northwest sunshine, concerts begin in the late afternoon or early evening. Music fans can shimmy in front of the stage or sit in one of the provided chairs while sipping local libations and nibbling on local bites. The Port of Anacortes free Summer Music Series takes place in July at Seafarer’s Memorial Park at 6 p.m. Musicians perform for the audience against a backdrop of mountains and water. Bring a low-back chair, a blanket, and some snacks.

Throughout the year, the Anacortes Arts Foundation organizes a variety of musical events at the Croatian Cultural Center. Ingrid Matthews, a baroque violinist, and John Lenti, a lutenist, perform a selection of German music in April. Trio Affettuoso performs Baroque and classical music in May.

Musicians are also featured at annual festivals. The Vela Luca Croatian Dance Ensemble will appear at the Waterfront Festival in June. The Anacortes Arts Festival, held in August, highlights the local and regional talent and schedules bands throughout the day at three different stages, making it easy for anyone to find music that speaks to their musical soul. In October, Bier on the Pier features musicians from all over the Pacific Northwest, with a focus on high-energy Americana. In December, Geoffrey Castle’s Christmas Celebration sells out with Celtic songs, dance, and an electric violin.

Whatever the mood‒jazz, rock, pop, classic, or country‒Anacortes’s passion for music lights up the beats on the streets.