Deception Pass State Park—only nine scenic miles south of Anacortes—has justly earned its ranking as the most visited of Washington’s 117 state parks, with some several million visitors a year. But once there, it takes only a short stroll to find yourself alone with 600-year-old Douglas-fir trees or Mt. Rainer-to-Canada views.

2013 was the year that Washington Parks celebrated its 100th year. It all started in 1913 when the legislature established a state park commission, primarily to accept citizen 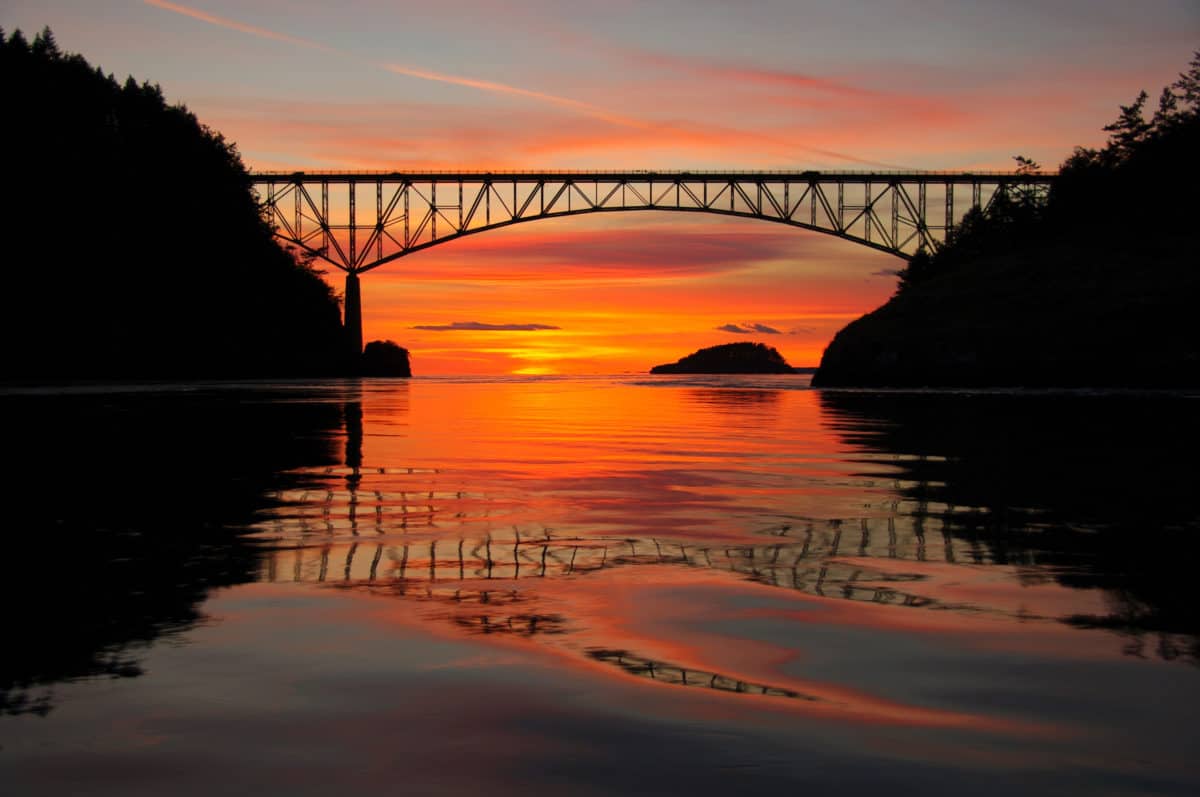 Once summer crowds have waned, Deception Pass Park’s 4,000-plus acres of old-growth forests, dramatic headlands, tide pools, and sand dunes feel more like a personal retreat—and make for a natural addition to your Anacortes visit.

First stop, the iconic 1934 Deception Pass Bridge. Along with most of the park’s classic stone and timber buildings, it was built by local skilled tradesmen and folks enrolled in President Franklin Roosevelt’s Depression-busting Civilian Conservation Corps. Peer over the bridge rail as boats challenge swirling, eight-knot tidal rips. Next, venture into the park proper (bring along your Discover Pass or pay $10 for daily parking). There you can hunt for agates and circle rocks, fly a kite, follow one of the many hiking trails to breathtaking bluffs, spread out a picnic, surf cast for pinks, follow a trail into a tide pool, or simply sit back and watch for passing orca and gray whales.

Shortly after, in 1793, British Captain George Vancouver arrived, directing his lieutenant, Joseph Whidbey, to explore what he thought was a small inlet or river mouth south of Fidalgo Island. Whidbey’s excursions led the party of explorers to conclude that the land south of Fidalgo was, in fact, an island, not an extension of the mainland. Vancouver honored Whidbey by naming the island for him. As for the narrow strip of turbulent waters between the islands, Vancouver dubbed it the “Deception Passage.”

So grab a box lunch from The Store Grocery or Gere-A-Deli and head for a day or an afternoon at one of our nation’s most awesome and accessible coastal parks. It’s the perfect way to do your own kind of celebration with nature!

Washington boasts the fourth-oldest state park system in the country, predating the National Park Service, founded in 1916. Today, there are approximately 120,000 acres of state parklands.

Approximately one-third of state parklands have been donated by citizens.

Set aside by the U.S. government as a military reservation in 1866, Congress designated the park for recreation in 1925. Today, it is the largest Washington state park and includes 10 islands.

The Great Depression caused the park to be closed for two years, beginning in 1929. During the Great Depression, the Civilian Conservation Corps trained young men invaluable skills as they developed the park for visitors. A small museum at Bowman Bay tells the story of the CCC’s work.