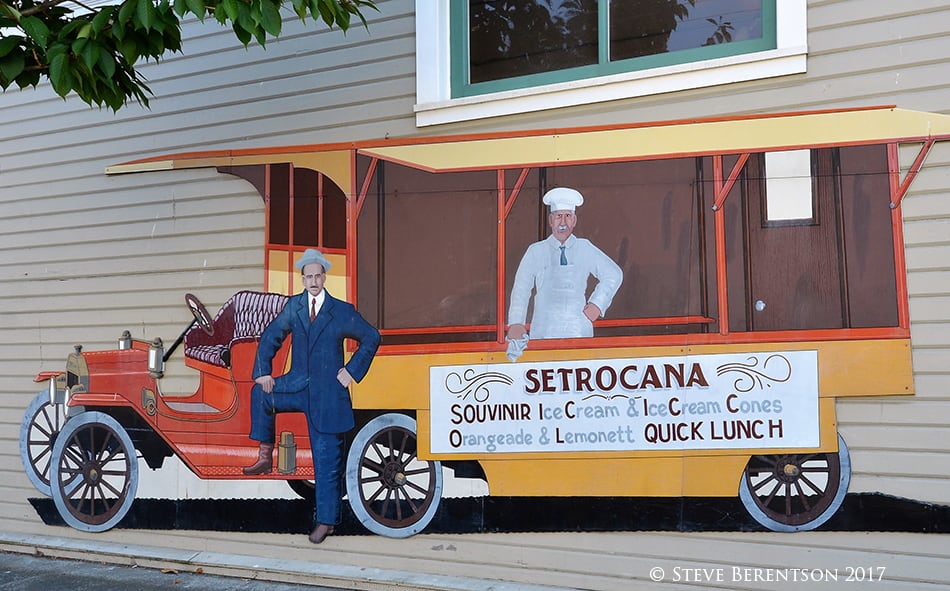 Most young people dream of making their mark on their community. Anacortes native Bill Mitchell has quite literally achieved that goal, creating over a 30-year period of time more than 150 colorful outdoor murals adorning the walls of buildings up and down this island community’s main street. 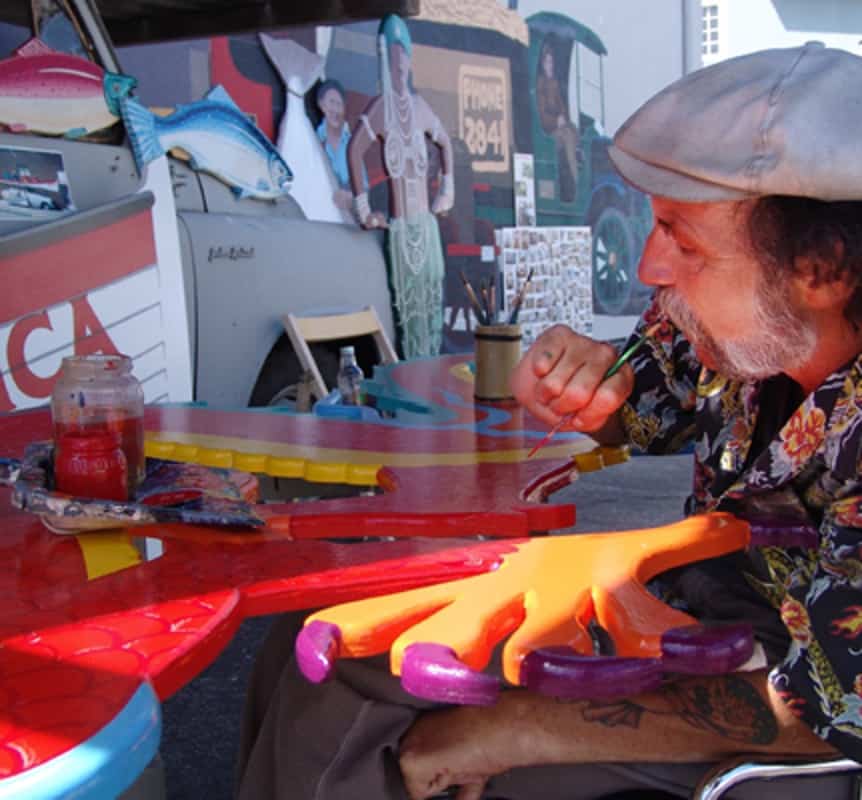 Most young people dream of making their mark on their community. Anacortes native Bill Mitchell has quite literally achieved that goal, creating over a 30-year period of time more than 150 colorful outdoor murals adorning the walls of buildings up and down this island community’s main street.

It is ironic that this native son’s artistic roots include a stint as a cartoonist for an underground newspaper during his college days. There is nothing underground about his mural work – public art presented in grand style on canvases of three-quarter inch plywood.

“I figured out once that my murals would create an 11-foot pile of plywood, weighing in at about 5,000 pounds,” said Mitchell. “Side by side, they would stretch out over a quarter of a mile.”

As it is, the vast majority of his murals are placed on multiple Commercial Avenue buildings from the south entrance to the city to the extreme north end where the avenue meets the Guemes Channel. They are everywhere – a delightful invitation to locals and visitors alike to seek, find and admire. 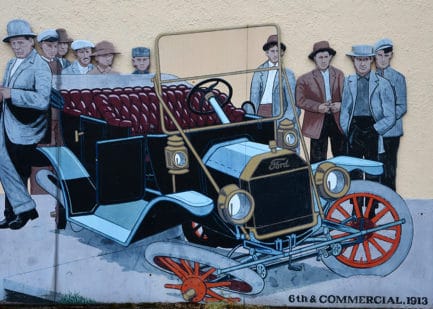 Mitchell remembers a community campaign in the Eighties to revive a city that had suffered numerous booms and busts in its 100-year history.

“This town needed something to keep the downtown alive.” He references outside help from the Main Street Program, and a directive from expert consultants to “put one person in charge and do it until it succeeds.”

A group of a few dozen community leaders met under the name of the Anacortes Renaissance and Revival Confederation. Out of that group, the Anacortes Mural Project (AMP) was conceived, and Mitchell emerged as its creative director. His vision was, by one description, decoys – people painted on wood – to attract curious visitors to the city. Despite its broad-based origin, the AMP has not been heavily financed by institutions and organizations.

“I’m not in this for the money, for the glory,” emphasizes the 66-year-old artist. “This is a grassroots project. The only reason we have it is that people like it and keep sponsoring new murals.” 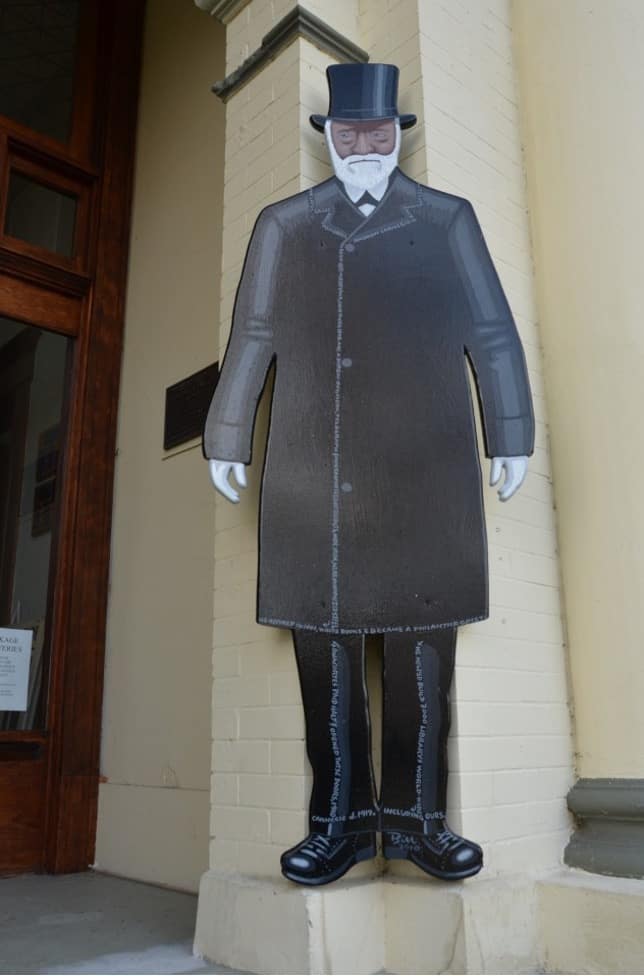 His first mural was inspired by an 1893 photograph of Fred White and his big-wheeled safety bike. What began as a sepia mural became a color piece when Mitchell started to paint the bicycle: black, white, gray, and silver. “Oddly enough,” he recalls with a laugh, “these monotone colors turned it into a colorful mural.”

Over the years the number of murals grew steadily, subject matter ranging from the city’s namesake (Annie Curtis) and her husband Amos Bowman (city founder) to fictional characters he created (mermaid “Setrocana,” which is Anacortes spelled backward). Visitors from Seattle might be surprised to find a mural featuring Bobo the Gorilla of Woodland Park Zoo fame (he grew up in Anacortes before his size and strength prompted a move). And patrons at the local theater will discover Mitchell murals featuring Hollywood giants such as John Wayne and Marilyn Monroe (skirt in the air!).

Mitchell likes to have fun with his murals, too. Among the unique features of his work is the occasional story printed freehand around the edges of the mural. See, for example, the cutout of Andrew Carnegie in front of the City Museum, once serving as this city’s public library. You will find a decidedly abbreviated biography of the famous American philanthropist.

The Anacortes Mural Project, impressive by any standard, is made even more so by the fact that Mitchell is a quadriplegic, paralyzed as a teenager in a car accident on nearby Whidbey Island. Rather than allowing the accident to crush his passion, the young artist resigned himself to overcoming the challenges paralysis presented.

He recalls the inspiration and encouragement of numerous mentors, including sculptor Phil McCracken and his grandmother, Ann Bessner. And he recalls a wrenching journey back to the wonderful world of art.

“You’ve gotta be clever to live and work from a wheelchair,” he said. “When your hands don’t work as they did, you’ve got to come up with new ways of doing things.”

Young Mitchell re-taught himself to write, and to draw. He studied art at Skagit Valley College, and then for two quarters at Western Washington University. It was a Western, he said, that a professor changed the course of his life, prompting him to take the fork in the road that led back to Anacortes. 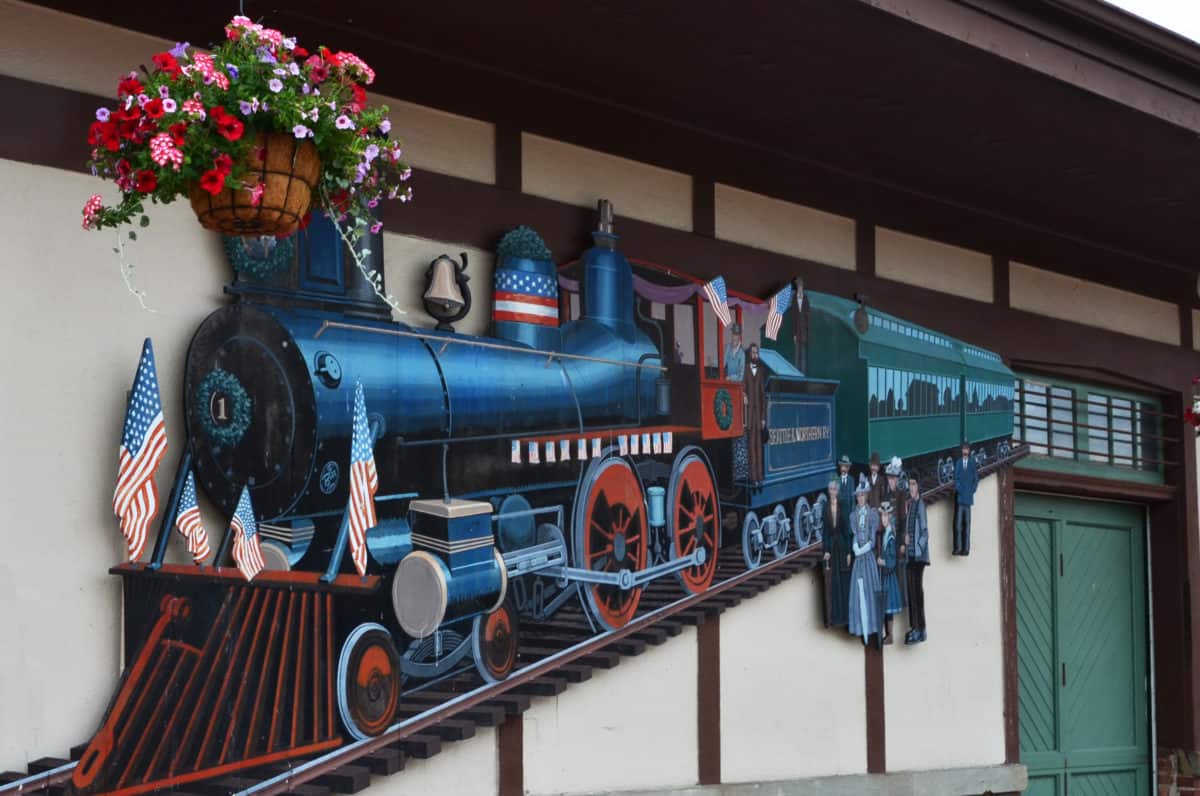 “He said there was a glut in the market for art teachers,” Mitchell recalls. “And he said, ‘An artist can always become a teacher, but a teacher will never have the time to become an artist.”

Back home in Anacortes, Mitchell experimented with all types of drawing and painting, including the cartoon or poster style since represented in his mural work. His first mural was painted in traditional enamels, but from that time forward, he moved exclusively to 1-Shot professional sign paint. Given the nature of the outdoor mural presentation, Mitchell noted that he spends many hours going over each project in his mind before he picks up a brush, trying to anticipate how it will look and how it will come together – literally – on the wall of a mural sponsor. He seeks to simplify, to create bold, life-size characters that catch the eye even as the viewer drives by in a car.

Volunteers at the Visitor Information Center (VIC) testify to the success of Mitchell’s vision, and to the draw, the Anacortes Mural Project represents to guests.

“It’s a wonderful way to inspire people to walk up and down Commercial Avenue,” says long-time VIC volunteer Kay Dow. In addition to tourists, admirers include locals interested in history, or in some cases, in locating a mural subject with family connections. Dow also references summer visits by passengers from the American Cruise Line: “Every Sunday morning some of our volunteers go down to the ship and walk with tourists up through the town, pointing out Mr. Mitchell’s murals. They are a unique Anacortes feature.”